The illumination of the New York City skyline is provided by hundreds of thousands of fluorescent lamps, of which an estimated 600 million are disposed of in U.S. landfills each year: this amounts to approximately 140 tonnes of mercury emitted into the environment. The mercury from one fluorescent bulb can pollute 6,000 gallons of water beyond safe levels for drinking.

A competition to design a summer pavilion in a small park on Governor’s Island presented an opportunity to explore this theme. The brief called for a space for talks, exhibitions and events. The construction of the pavilion was to convey a message of environmental stewardship, be from 100% recycled/recyclable materials and completely de-mountable: no trace was to be left after its dis-assembly.

Enlighten proposed a collaboration with commercial waste management organisations to divert 9,000 spent fluorescent tubes from collection points around New York City to Governor’s Island for the construction of the pavilion. The lamps were to be suspended from a scaffold structure using recyclable nylon clips to enclose the space. By passing an electrical current through copper coils wrapped around ‘live’ tubes, the pavilion would glow at night – an ethereal response to a real issue. Once dismantled, the fluorescent tubes were to be transported to a recycling plant in New Jersey for processing.

The pavilion was designed to promote a renewed awareness of the systems and processes that contribute to our urban existence and their potentially detrimental effect on our environment. The project utilised urban detritus to create a dynamic meeting place for discussion, education and enjoyment.

Implicitly, Enlighten proposed an optimistic future city where innovation supplants inefficiency and waste is perceived as an opportunity rather than an inevitability amongst designers. 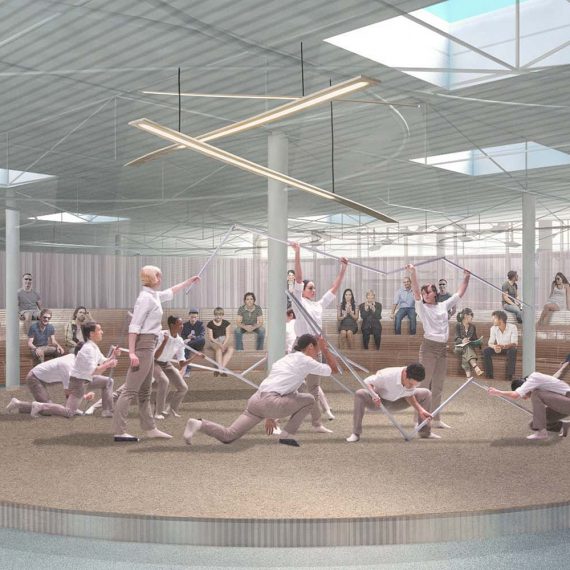